AZERBAIJAN: Support to the enhancement of the capacity of the Ombudsman administration (Twinning)

The overall objective of this Twinning light project was to contribute to the strengthening of the capacity of institutions responsible for promoting and protecting human rights in Azerbaijan, in particular the Office of the Ombudsman, and approximation of the respective legislation to EU standards.

Inter alia, the project aimed at assisting the Ombudsman’s staff in drafting legal amendments with regard to the institution’s function as National Preventive Mechanism (NPM) for preventing torture and other cruel, inhuman or degrading treatment or punishment in all places of detention. Further components of the project dealt with the training of experts of the Ombudsman’s Office, and university and high school students on promoting and protecting human rights of vulnerable groups.

The project was implemented by the German Institute for Human Rights, the German Agency for International Cooperation as well as the German Federal Foreign Office and the Ombudsman of the Republic of Azerbaijan as Twinning partners.
The BIM contributed to the project by providing extensive short term expertise on the establishment of NPMs, combating torture and the protection of human rights of persons in detention. Based on consultations with the Ombudsman’s staff, but also with Azeri NGOs active in the field of torture prevention, the BIM experts elaborated draft rules of procedure for the NPM. In their recommendations they particularly emphasised the inclusion of civil society representatives into the NPM.
In addition, the BIM experts observed monitoring visits carried out by the Ombudsman’s staff to places of detention and provided training on general principles of preventive visits to places of detention. 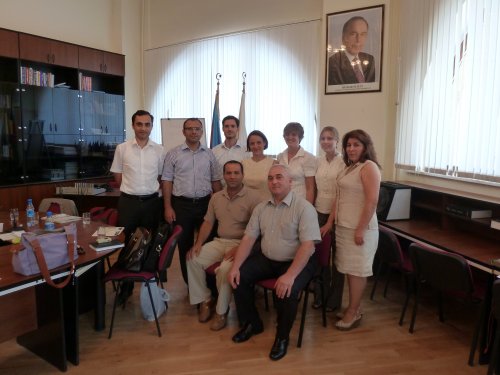 a.
a. LBI-GMR-project team with Azerbaijani colleagues